Addition of functionality to a bacterial genome:  added information 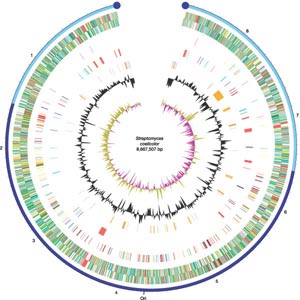 The genome of Streptomyces coelicolor has recently been fully sequenced at the Sanger centre in the UK, Nature 417, 141 -147, Bentley et al (1)

S coelicolor is a soil bacterium that has many different metabolic processes and biotransformations that allow it to live under a wide range of conditions in the soil and use a wide range of metabolic pathways to, for example, degrade insoluble remains of other organisms. S coelicolor is unusual, in that it is a multicellular bacterium which forms into different sorts of 'tissues'. The complexity of its metabolic pathways give rise to two thirds of modern antibiotics, as well as anti-tumour and immuno-suppressant agents. All this complexity arises from the longest known eubacterial genome (8.7 million base pairs and 7,825 genes; about one quarter the number of human genes).

The S coelicolor chromosome is linear. It is divided into a core region which extends from 1.5Mb to 6.4Mb (a length of 4.9Mb or million letters)(1.5Mb to 6.4Mb means megabases or millions of genetic letters - this is a position on the chromosome - we start counting at one end which is position zero; the other end is position 8.7 million) ; and into two other regions, one before 1.5Mb on the leading arm and one after 6.4Mb on the trailing arm. All of the genes essential for the viability of the organism lie within the core region. That means that the essential-for-life genes are clustered into the central region. Genes associated with secondary (non-essential function, or nice-to-have) lie in the outer arms.

However, the genes outside the core region of S coelicolor (in those arms before 1.5Mb and after 6.4Mb) show no synteny (genes in the same order) with the other bacteria. So for the following reasons, in S coelicolor, the leading arm up to 1.5Mb and the trailing arm after 6.4Mb are later additions to the genome:

So where did these additional genes in the arms of the chromosome of S coelicolor come from? 14 sequences in the arms correlate with known mobile genetic elements and are therefore likely to be Insertion Sequences. (There are certain genetic sequences which code within themselves the ability to move from the chromosome of one organism to another - even where the organisms are different species).  Six others are the same as plasmid genes which are found in the related bacterium S ambofaciens pSAM2 plasmid. (Plasmids are cellular structures which contain separate islands of DNA - genetic material - found in bacteria separate from the chromosome. There is a lot of evidence that in evolution genes can migrate from bacterial plasmids to bacterial chromosomes) There is also evidence for transposition within the chromosome and gene duplication.

So in this bacterium, an original core chromosome has had an additional 3.8Mb of DNA added in evolutionary development which has resulted in a morphology (morphology means the physical form the bacterium takes - non-dividing many branched mycelium versus dividing cells) and a metabolism (how it gets its food and creates its energy for living) that is more complex and very different from its relatives.

There is a huge amount of functionality that has been added to the arms of the chromosome through the evolutionary process: new genes coding for new functions.

So we see that functionality and DNA has been added to genome of S coelicolor since its divergence from M tuberculosis and C diphtheriae; evidence which stand in contradiction to the claim that information cannot be added to the genome through evolution.