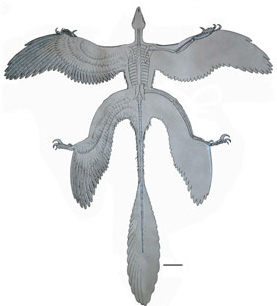 The origin of birds is a very interesting question in evolution.  Over the last few years it has become increasingly certain that birds evolved from a group of small dinosaurs called dromaeosaurs, part of the bipedal group known as theropods.  Several important finds, many from China, have been made in the last few years (1) (2) (3) (4) (5) (6) (7) (8) which support this hypothesis.  Fossils have been found which demonstrate the evolution of feathers and the anatomical structures necessary for flight. Feathers appear to have evolved well before flight and there is a considerable controversy around how flight originally evolved:

The two basic hypotheses are the bottom up and the top down approaches.  In the first case, the evolution of flight is seen as a running, flapping process.  In the second, the proto-birds are seen climbing trees and gliding from tree to tree or to the ground much like flying squirrels do today. Both hypotheses have some evidence to support them.

Now Xu et al (9) describe a fossil of a dromaeosaur that has four wings including fully formed feathers on each of its four limbs. The fossil dates to 124 million to 128 million years.  It has been named Microraptor gui.

The aerodynamic function of the feathers is extremely likely as they are asymmetric and the asymmetry increases towards the ends of the wings.  M gui has a long tail with feathers - the presence of post caudal vertebrae is a transitional feature seen only in transitional birds. Xu et al argue that flight began with arboreal (tree-climbing and dwelling) dromaeosaurs that developed the ability to glide with four wings.  As they further evolved powered flight, the aerodynamic functionality of the rear wings was lost and birds relied only on their two (fore-) wings for flying.

Further study of the fossil is likely to reveal whether the anatomy of the skeleton confirms the hypothesis that Microraptor relied on gliding or whether it was actually capable of powered flight.

The detail associated with understanding the evolution of birds is increasing with every new transitional fossil found.